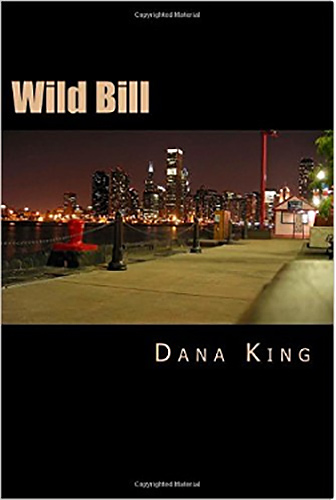 Will Hickox is a decorated FBI veteran with a legendary ability to cultivate informants, much closer to retirement than to the days when he earned the nickname “Wild Bill.” Operation Fallout should cut the head off of the Chicago mob and provide a fitting capstone to his career. When Outfit boss Gianni Bevilacqua dies and the resulting war places Fallout in jeopardy, Hickox does what he can to save it, and his retirement plans with his lover, Madeline Kilmak.

Wild Bill examines the stresses of Operation Fallout from the law enforcement, criminal, and personal perspectives, as Will and his peers fight to keep the investigation afloat amid the power struggle between Gianni’s son and elder statesman Frank Ferraro. Torn between wanting closure to the investigation and starting his retirement, Hickox weighs the dangers of involving himself and Operation Fallout in the war, blurring the line he walks with his informants.

“Wild Bill is an incredibly well written debut novel loaded with masterful dialogue and characters you’ll want to follow through the dark side of Chicago’s ‘outfit.’ It’s a mob novel as good as any out there, past or present.”
—Charlie Stella, the Godfather of mob fiction

“If author King isn’t an undercover agent himself, he must have a best buddy who is; this book has the smell of real life to it.) The story line proceeds in a series of hard, sharp shocks, the last one the most brutal, but somehow it rounds out the book in a way that makes you realise you were subconsciously expecting it.”
—New Mystery Reader

A car pulled up beside the truck with the rest of Swisher’s crew. One man got out, impact wrench in hand, in case the driver forgot and locked up. Swisher opened the door and Vinnie heard him say, “Jesus Christ!” from thirty yards away when Bruno Ponti pointed his gun at him, Bruno on the floor of the truck since before it was parked.

Swisher’s outburst got enough of his crew’s attention for Vinnie’s guys to take control of the situation. Vinnie got out of the car and walked toward the truck while his guys moved Swisher’s crew toward the back.

More noise from Swisher when he saw the inside was empty, then everyone climbed in.

Beautiful, clear night. Vinnie’s steps on the gravel echoed between the sides of parked trucks, not a sound from the back of the panel van. Vinnie turned the corner and saw Swisher’s face drop as he recognized him and guessed what came next.

Vinnie got helped into the van, saw two of Swisher’s guys holding him by the arms. The fourth man stood to the side, covered by a couple of Vinnie’s. Bruno stood behind Swisher, gun down along his leg.

Time passed to allow the gravity of the situation to sink in before Vinnie spoke to Swisher. “You know who I am?”

Of course Swisher knew who he was. He’d been paying Vinnie off after (almost) every job for seven years. This was not the time to smart off. “Yeah, sure, you’re Vinnie—”

“Shut the fuck up.” Vinnie paused a beat to be sure Swisher really had shut the fuck up. “I didn’t ask you my fucking name. I asked if you knew who I was.” Swisher nodded.

“You know what etiquette is?” Vinnie said. Soft, his voice still filled the van.

Swisher gave confused, stammered, “Etiquette? Sure, Mr. Agrigento, etiquette’s like being nice to people. Polite, you know, like holding doors for old ladies and—”

Vinnie raised a hand and Swisher stopped. “Pay attention. Etiquette means you don’t even think about taking off a fucking diaper truck without you let me know something’s going down so I can get my taste. You understand me?”

Swisher nodded twice, quick. “Sure, Mr. Agrigento. I didn’t mean nothing. This just come up so fast, you know, there wasn’t time to get it to you. I got a fence already, I was gonna come by to see you tomorrow, honest to God I was.”

“Shut up. Tell me what etiquette is.”

“Etiquette,” Swisher said, like a kid repeating the word before he spells it. His eyes pleaded with Vinnie, afraid to look at him, even more afraid to look away, praying Vinnie brought the whole crew to throw some fear and not to administer his idea of adequate punishment for last week’s sporting goods. And the small appliances last month. The bootleg DVDs Swisher boosted from the Chink importer the month before that. “Etiquette means I always tell you before I pull any job. Always. No exceptions.”

Vinnie took a step to his right. “You think you can remember that?”

A look that might have been hope came into Swisher’s eyes. “Sure, sure, Mr. Agrigento. I can remember that.”

Vinnie said, “Bruno, make sure he don’t forget,” and Bruno shot Swisher once in the back of the head. Blood and bone and brain flew from a fresh hole in his forehead, smacked against the wall. The smell of urine mixed with cordite as one of the guys holding Swisher lost control.

Vinnie watched the two mopes hold Swisher’s dead weight between them like there might be something else planned, suppressed a smile. Amateurs. “You two can let him go now.” They let the body fall. It laid on the floor like a bag of laundry.

“You,” Vinnie said to the one who pissed himself. “What’s etiquette?” Bruno cocked the automatic.

“Bruno,” Vinnie said and Bruno pushed the muzzle of his gun into the soft spot at the back of the pussy’s head. “Last chance. What’s etiquette?”

“Etiquette—oh Jesus Christ I don’t want to die—etiquette means I should never pull any kind of job and not tell you first. I swear I won’t ever, Mr. Agrigento. I won’t pull any more jobs if you say so, just don’t kill me.”

“Shut the fuck up.” Vinnie turned to the other man who’d held Swisher. “Your turn.”

This one didn’t cry, didn’t beg, didn’t wet his pants. His eyes met Vinnie’s, flicked once to Swisher’s body, then back. His voice level and calm. “Etiquette means I never pull any job unless I tell you something’s going down first, and I make sure you get your taste. The way it should be.”

Vinnie made a mental note to keep an eye on this one; he had potential. “What’s your name?”

“What do they call you?”

Barra had some size on him, nothing dramatic. Maybe he has a trunk in his pants, Vinnie thought. “What about you?” he said to Swisher’s remaining guy. “You understand what happened here?” Nods and sounds of affirmation. “Get lost. All of you.”

Bruno policed up his brass, left the gun next to Swisher’s body. Couple of guys helped Vinnie down from the van.

“Bruno, put a buck in his mouth.” Vinnie’s sign for a tax cheat. Then, to the others, “leave the door open a foot. I want him found, just not right away.”

Vinnie watched them do exactly as he said, a benevolent foreman supervising a well-trained crew. When the dollar and the door were properly positioned, Vinnie led his guys to their cars. “Anybody hungry? There’s this joint couple of miles from here on Golf Road. Makes the best fucking meatball subs anywhere. Let’s go. I’m fucking starving.”