Vicki Leydig thought she was going to have a few drinks with her friend Mary and maybe get to spend a little time with Doug Stirnweiss at the Allegheny Casino. She didn’t expect Doug to offer her a ride home, and she sure didn’t expect to watch a stranger blow Doug’s head off in the parking lot. Penns River police don’t have much to go on until Detective Ben “Doc” Dougherty interviews casino employees and learns of drug deals going down in and around the property. Leads show promise and fall apart with depressing frequency until the local prosecutor turns a minor charge into a statement that leads Doc and the rest of the police force to a surprising conclusion, though not before tragedy strikes one of their own.

This isn’t the only thing Penns River has on its plate. A consent decree signed with the federal government has brought three new female officers to the force, and Deputy Chief Jack Harriger continues his push to take over the top job from Stush Napierkowski. Doc learns his young friend Wilver Faison may be a key player in the local drug trade and one Penns River cop has a secret he’d just as soon keep to himself.

Meanwhile, Pittsburgh mob boss Mike Mannarino faces increasing pressure from his bosses in New York, so much so he’s thinking of reaching out to Chicago for protection. What the rest of his crew has to decide is whether Chicago is the only other organization Mike might make an arrangement with.

It’s just another week in the town of Penns River, with distractions that range from petty vandalism to a bridge jumper keeping the cops’ full attention away from the critical task at hand.

“Ten-Seven is a prime example of the kind of small-town procedural that tells you as much about the town and its denizens as it does the crime at hand. The kind of solid plotting and characterizations I love in another favorite Pennsylvania crime writer, the great KC Constantine.”
—Scott Phillips, author of The Ice Harvest and The Walkaway
“Dana King’s latest novel Ten-Seven returns his readers to Penns River in a propulsive mystery thriller that showcases his ear for dialogue, penchant for wry humor, and mastery of the police procedural, all while his finger is firmly on the pulse of America’s Rust Belt. Ten-Seven is the perfect novel for fans of Elmore Leonard and Tana French and will leave his readers hungrily awaiting the next installment.”
—Eryk Pruitt, Anthony-award nominated author of What We Reckon

“Consistently one of the best in the business. As good as any I’ve ever read. Dana King, to quote Don Kirkendall, of Men Reading Books, is “top shelf entertainment.” Ten-Seven keeps that ball rolling.”
—Charlie Stella, the Godfather of mob fiction 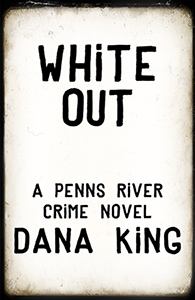